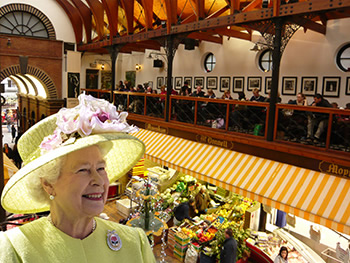 There has been a market  at this location since 1788. Originally there were a number of different markets located beside each other. A nineteenth century map shows the English Market in the Princes Street area, with the remainder called the Grand Parade Market. In the nineteenth century also there are references to The English Market which was for more prosperous people and The Irish Market which was for the less well off. Even during the Irish Famine of the 1840s, the English Market had a supply of good quality food including potatoes but it was too expensive for the poor of the city.

After 1920 and the war of independence, the market fell into decline until the 1960s when it was revived and modernised and another major upgrade was done in 1977 but a fire destroyed large sections of it in 1980. there were further renovations in 1993 and the market began to gain popularity again. It changed from being associated with cheap cuts of meat, fish and basic foodstuffs to a much more diverse market selling al types of exotic foods and spices while retaining its traditional fish and meat markets. In this market you will also find some of Cork’s traditional specialities such as tripe, drisheen (a sheep’s blood pudding) and spiced beef.

The English market has received acclaim from numerous travel writers and food critics including Rick Stein who said of The English Market: “In my opinion this is the best covered market in the UK and Ireland” The Lonely Planet travel guide says: “The wonderful market is a self-caterer’s paradise with so many tasty delicacies to choose from it’s hard to show restraint.”

The visit of The Queen and Prince Philip which was broadcast worldwide is certain to make The English Market an even more popular visitor attraction in the coming years and Cork Hotels and Cork Bed and Breakfasts will hope to reap the benefits.